Menu
A
Google Search
B
Google Translate
C Log in

Come and look at this page of the website to find out all the marvellous music things we've been getting up to!

On Monday this week, our singing playground leaders went to Uplands Manor for their second leader day.  They had a great time, and learnt loads more new fun songs and games to share with everyone back at Cape.  This week they've chosen Eh Memarie as the song of the week.  The song is from Estonia, but isn't in proper Estonian, it's made up of nonsense words! Have a listen below.  The playground leaders have now also got bright hats and jackets, so look out for them at break times on Mondays, Wednesdays and Fridays and join in with their song.  I wonder how many people we can get joining in at the same time?

This week our recorder players have also been busy practicing their music reading skills.  Look, they even had a go at writing some rhythms of their own:

If you're interested in starting recorder or choir club, watch this space as new groups will be starting soon!

Wow, what can I say? Young Voices 2016 was very definitely AWESOME!!!

On Monday, some children from Years 5 and 6 travelled to the Genting Arena to sing as part of a choir of an amazing 6238 children! Highlights included a beatboxing lesson from the very cool Beatbox Collective, singing the rugby world cup song ‘The World in Union’ with soprano Laura Wright, and giving the first ever performance in the world of Tom Billington’s song HYPER!  We also took part in the UK’s biggest tribute to David Bowie, performing ‘Life on Mars’ after just 10 minutes rehearsal.  The Cape children did brilliantly, singing and dancing their hearts out, especially to their big favourites Power in Me and Everything is Awesome! They were an absolute credit to the school and made the teachers really proud, so well done everybody!

Have a look below for some photos and video from the event. 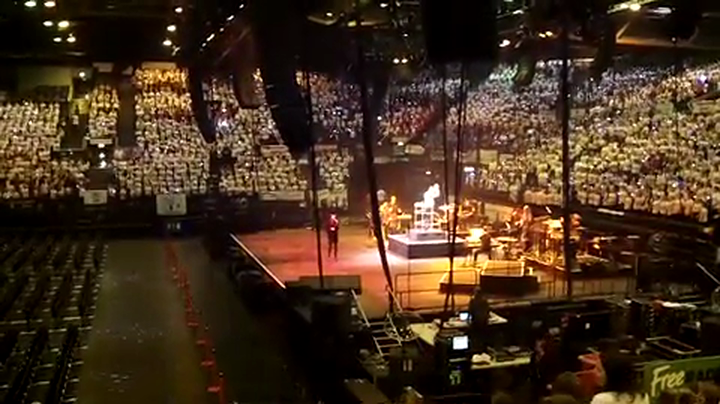 WOW!!!!! I knew the children in EYFS, KS1 and Year 5 had been working hard on their end of term productions, but their performances this week were even more brilliant than I was expecting! It just goes to show that all that practice was worth it. A huge well done to all the children and teachers involved!

A special mention to the Year 5s, who made all the teachers so proud with their fantastic performance of Pirates versus Mermaids. I'm sure you'll agree that their commitment to make their show the very best they could really paid off! Here are a couple of recordings from the show:

There were some great entries for this, well done everyone! A special mention has to go to Melodie for her entry, and the joint winners were Ruth and Muslima for their song Stop the Bullying and Amira and Aliza's version of Sam Smith's Stay With Me, which you can see below: 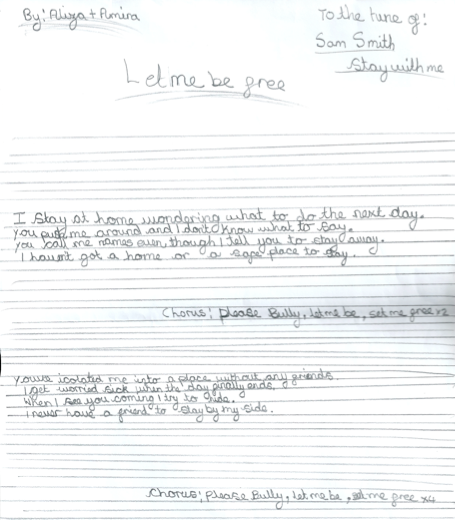 The Y5 and 6 children in the Young Voices Choir have been working fantastically hard this term to learn all the songs and dance moves for the big event in January.  Today was our last after school rehearsal this term, but we will have one very final practice on Thursday 7th January 2016. If you're in the choir, don't forget to keep practicing all the songs over the holidays!  Here is the link to the choir section of the Young Voices website so you can get song lyrics, backing tracks, dance videos and loads of other useful information - http://www.youngvoices.co.uk/choir/vrnCoHLVXerx - just ask Miss Wrighton if you need help registering!

This half term the Year 6s have been looking at repeating patterns.  They had great fun today using the LoopsequeKids app to create some of their own patterns, and also had chance to find out more about Gamelan music using the Virtual Javanese Gamelan app.  Both these apps are free so you might even be able to try them out at home! 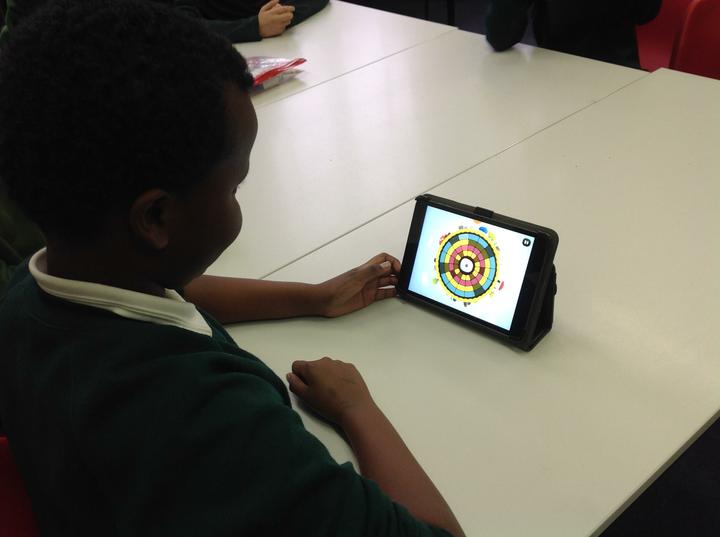 After a busy first half term, it's time for me to share some of the fantastic musical things you've been getting up to!  Year 2 have had great fun learning 'Hey You!' and creating their own version of the rap.  Year 4 finished this half term by learning the song 'I Wish' for Black History Week, and Year 1 have made a great start, especially enjoying learning to sing 'Hey Hey Look at me' and 'Little Green Frog'. I hope you enjoy listening to the examples below and have a great half term break!

KS2 we treated to another great live music performance by teachers from Sandwell Music and Arts Service, including Mr Singh who used to teach at Cape, and Mr Hopson and Ms Cooke who come in this year to teach drumming and keyboard. Here's a photo of them all in action:

Wow, what an amazing performance the Zulus gave us as part of Black History Week! Their drumming, singing and dancing was incredible, and they had everyone joining in in no time.  KS2 even got to take part in a dance workshop with the Zulus too! Can you remember what part of the world they were from? We've got more musical visitors in school next week.....I wonder what sort of music they will perform?

Today, 30 children from Cape joined other Sandwell school children to find out how to be a Singing Playgrounds song leader.  They had a great time learning loads of fun singing games, and can't wait to start sharing them with everyone else at school!  They'll be telling everyone more about it over the next few weeks, including news about the Cape singing stop and the cool Singing Playgrounds stickers they've got to give out if you take part.  I wonder if you've already had a go at 'Bungalow'? Listen out in the playground to find out what the new singing game is for next week!

Well we're off to a great start! On Tuesday year 5 and 6 were treated to a fantastic assembly from the Yamaha drumming workshop team.  The children must have enjoyed it because I now have a very very long list of all the children who'd like to have drum lessons!! There will be all sorts of music clubs starting in the next couple of weeks, including keyboard, recorder, guitar and choir, so don't forget to sign up if they are for your year and you're interested! 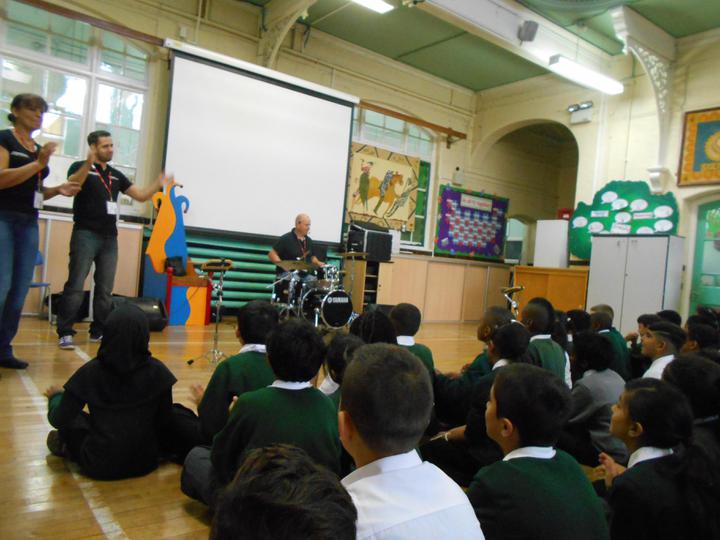 What a way to finish our music year at Cape! The year 6s have worked incredibly hard over the last couple of weeks to rehearse and get everything ready for their leavers' show. However, it certainly all paid off, because their production of Robin and the Sherwood Hoodies was absolutely brilliant! Some teachers even said it was the best Cape production yet!! A huge well done to year 6 and the teachers, and of course good luck with everything in the future as you move on to your new school!

This morning, 30 children from year 4 and 5 visited Birmingham Conservatoire to watch some of the Music for Youth National Festival.  We took part in a short workshop about folk music with Joe Broughton from the Urban Folk Quartet, and then got to watch lots of exciting and inspiring performances given by other young people.  There were traditional Irish folk groups, steel pans and a samba band to name just a few, and by the end of the morning everyone had chosen their favourite performance, or an instrument they wanted to find out more about.  The Cape children behaved brilliantly and were excellent ambassadors for the school, so well done everyone! Hopefully we'll get to go again next year!

Wow, I'm so pleased I got to see this! The year 3s have worked so hard this year with Mr Kelly, I was really excited to hear them perform the pieces they have been working on.  The year 2s came along to watch, because they're going to get a chance to learn ukulele next year.  I know they, and all the teachers, were really impressed by how much the year 3s had learnt, and we loved singing along to Shake It Out! Thank you Mr Kelly for a great year, and watch this space, because not only will the year 2s learn ukulele next year, but some of the year 3s will get chance to take part in a new guitar club too!

It's been another busy week for music!

On Thursday the year 6s took part in a Samba drumming workshop run by Tim from Rhythmicity.  They had a brilliant time, and I was really impressed by how well they'd remembered all the skills we'd practiced in our music lessons! The whole day finished with all the year 6 children performing together to Reception.  It was absolutely fantastic to see them all working so well together to create a really exciting (and very noisy!) performance! They also really impressed Tim with their great behaviour and hard work throughout the day. Well done year 6!

But that's not it! This morning, year 1 have had a busy time sharing the picnic songs they have learnt this term.  In assembly some of the children chose their favourite songs to share with year 2.  Then, 30 children travelled to St Hubert's to take part in the Sandwell Music KS1 Singing Event.  We were expecting there to be a few schools there, but in the end there was only us and the year 2s from St Hubert's.  That didn't matter at all though, and we had a great time singing the picnic songs together, and even learning a new song with a dance routine!

Wow, what a week for music at Cape!  It all started on Monday with a performance from the Apollo string trio, who taught us loads of facts about the violin, viola and cello, and amazed us with their playing skills. Then on Thursday the whole of year 6 went to West Bromwich Town Hall for a Sandwell Music singing event.  They had great fun learning new songs, and singing with year 6 children from other local schools.  (Don't tell them I told you, but even the Y6 teachers joined in with the singing and dancing!!)

Then on Friday it was BBC Music Day.  Throughout the day, children got up to all sorts of musical activities, starting with the year 5 and 6 choir singing Rather Be for everyone as they came into assembly.  Year 5 did a whole year performance of 'Connect It', one of the BBC Ten Pieces they've been exploring this year, and LKS2 got to see the Ten Pieces film for the first time (I wonder which piece was their favourite?).  KS1 also created some fantastic artwork inspired by these famous pieces of classical music.  Year 2 had a very exciting afternoon with some special year 6 visitors who did a brilliant job teaching the year 2 children one of their new songs, and Jasmine and Ruwaida even came and played them some pieces on the recorder!

I hope you enjoy looking at some of the pictures of what was definitely a marvellously musical week, and come back soon to see what else we've been up to!